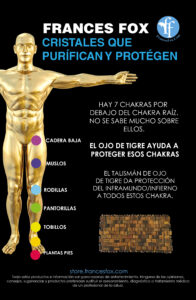 Atala means “without bottom”. It symbolises fear and lust. As awareness slips below the muladhara into fear, indecision stymies ambition and a licentious lifestyle dulls the pranic sheath.
The first tala, atala, situated in the hips, is said to work together with svadhisthana and muladhara chakras. Somebody who has one foot in muladhara and svadhisthana will have the other foot in atala. We can also have one foot in the chakras and the other in the talas. Yoga can help us all to raise our energy and become better human beings, even murderers who kill only for the sake of killing. The feeling of having done wrong has to arise. The will must be educated and transformed in order to change one’s life.

Vitala, meaning “the region of nagation”, in Sanskrit. It is the region of raging anger and viciousness. It is the second chakra below the muladhara, centered in the thighs and corresponds to the second astral netherworld beneath the earth’s surface, called Avichi (“joyless”) or Vitala.
The substance of this chakra is more material or differentiated than atala which precedes it; the second on the descending scale of the seven talas, corresponding to taparloka. Vitala is related on earth to the state of samadhi, and in one sense also to human buddhic consciousness. No adept, save one, can be higher than this in the tala side of his consciousness and continue living on earth. All the different talas and their corresponding lokas are connected both with states of consciousness and with varieties of vehicles on which these various consciousnesses work. Every tala with its respective loka forms a bipolar sphere containing its own hosts of conscious entities imbodied in vehicles appropriate to the loka-tala or tala-loka in which they are.

Tala (Sanskrit) Lower or inferior portions of a series, inferior world; also a chasm, abyss, floor. All these ideas suggest lower or inferior planes. Often used in conjunction with loka (place, world). The talas stand for the material aspects or substance-principles of the different worlds which are the cosmic universe, in contrast with the lokas which suggest the spiritual aspect of the universe.
Sutala, the Sanskrit for “great depth”; su meaning good or excellent and tala, meaning sphere. It is the region of obsessive jealousy and retaliation. Wanting what others have and preoccupation with what one is not gnaws at the mind, instilling ill will. It is the third chakra below the muladhara, centered in the knees. It corresponds to the third astral netherworld beneath the earth’s surface, called Samhata (“abandoned”) or Sutala. Believed to be the abode of Bali Maharaja with Lord Vamana as the guard at his gate.
Sutala is a differentiated state of highly ethereal astral substance, corresponding with sabda (sound) and with the higher manas in man, and therefore with the higher ego; likewise with the Manushya-buddha state, like that of Gautama on earth. 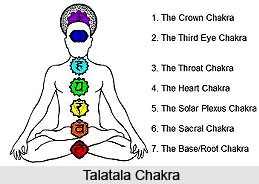 It is the fourth chakra below the Muladhara chakra. It is centered in the calves, the region of chronic mental confusion and unreasonable stubbornness. It corresponds to the fourth astral netherworld beneath the earth’s surface, called Tamisra (“darkness”) or Talatala. This state of consciousness is born of the sole motivation of self-preservation.
Talatala corresponds to the hierarchies of rupa- or sight-devas, possessed of three senses: hearing, touch, and sight. It is the abode of certain kama-manasic entities and of certain classes of the higher elementals. The state of talatala corresponds in man on earth with an artificial state of consciousness, such as that produced by hypnotism or drugs

The number of loka-talas is generally given as seven, though the number varies, all the seven lokas and seven talas interblending and interworking to form the universe and all its various hierarchies.
Rasatala Chakra is the wheel of the Subterranean region. The fifth chakra below the muladhara, centered in the ankles. It corresponds to the fifth astral netherworld beneath the earth’s surface, called Rijisha (“expelled”) or Rasatala. Resides in the region of selfishness, self-centeredness and possessiveness. Rasa means “earth, soil; moisture.”

It is the sixth lowest astral world residing in the region of consciencelessness. It comes from the Sanskrit word, Maha meaning great and Tala meaning sphere. Mahatala among other things corresponds to the elemental beings that are connected with taste, and therefore includes the state of consciousness appertaining to this class. It corresponds in one sense to the pranic activity in man. Mahatala is the next to the grossest of the cosmic spheres or realms; the grossest or most material of all being patala. 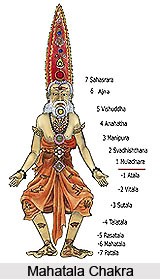 The lower worlds – equivalent to the Western term hell, a gross region of the Antarloka. Naraka is a congested, distressful area where demonic beings and young souls may sojourn until they resolve the darksome karmas they have created. Here beings suffer the consequences of their own misdeeds in previous lives.
Patala is the Sanskrit for “fallen or sinful region”. It is the seventh chakra below the muladhara, centered in the soles of the feet. It corresponds to the seventh and lowest astral netherworld beneath the earth’s surface, called Kakola (“black poison”) or Patala. This is the realm in which misguided souls indulge in destruction for the sake of destruction, of torture, and of murder for the sake of murder. Patala also names the netherworld in general, and is a synonym for Naraka.